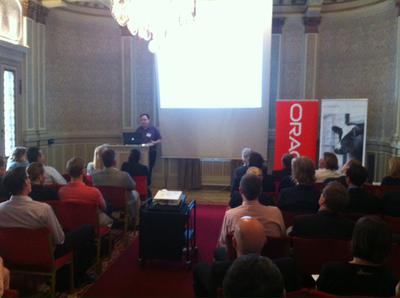 The conference was an interesting conference mainly in how different it was from many other events I have spoken at. I had been warned before that the "logistics might be a bit bad" which was a bit of an understatement. The first thing I noticed was that there were no signs at all when I entered the hotel lobby. I had to go ask the bell hop where the conference was. This went on there were no signs anywhere and given that the venue stretched over three floors with a lot of hallways and rooms-inside-rooms finding my way was extremely difficult. There were a lot of little annoying things like this which really got me thinking. I really should reach out more to the extremely competent people in Bolzano, Nuremberg etc who always arranges superb conferences. Apparently it is more difficult then it seems to get a conference to running smoothly.

But logistics aside the event was pretty nice and I had a great time. My talk, about Continuous Delivery (in enterprise development and integration), was well received and the room was full with some people standing at the back. Now this might sound grand but does not really mean anything since the rooms was pretty small (60 people tops) but still: nice to talk to a full room. What has really nice though was that a lot of people came up afterwards and we had some great discussions. This I think is really the best way to measure success. 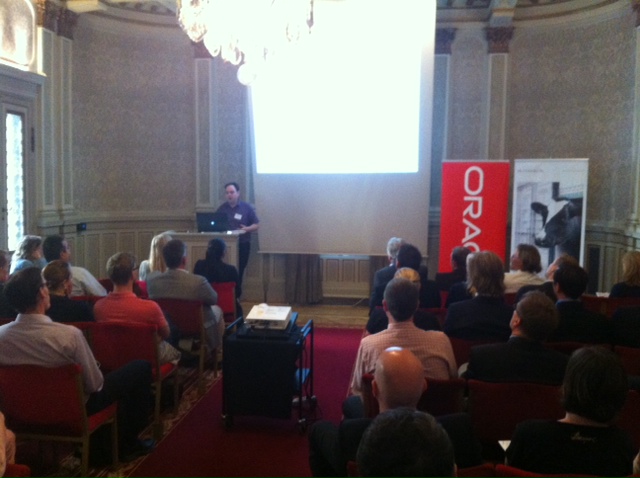 Another interesting reflection is that my company payed around $6.000 or $12.000 dollars to be at the conference. And while my talk is not advertisements for our company or our services a lot of the other talks were direct advertisements for various services and products.Now this in it self is nothing strange right? If companies have spent a lot of money to be here they would be expected to create a bit of a buzz right?

The problem here is that the participants have also payed to be at the conference. So they shell out around $1000 dollar per head and for that they get to listen to payed advertisements? Sounds a bit off to me. Personally I believe that the free speaker model is better where speakers do not pay to come and instead (hopefully) have something to say.

Chinese proverbs and the Obama campaign

Unfortunately I missed large parts of the conference partly as I wanted to rehearse in the real room as well as I opted to hang around our booth for a bit. But I did see the intro section which was mainly about the usual buzzwords: mobile, cloud, social etc. On guy from IBM had a really interesting talk where he explained how Obama had won the last election by exploiting social and analytics. He opened the talk with a (fake) Chinese curse: "May you live in interesting times" but it really bothered me that he did not end with the obvious "In china the word for danger and opportunity" is the same (which is also fake). Instead he went with "and your interesting times will be great" or something like that. A really missed opportunity. But that aside the talk was excellent. I also caught a few other talks which was interesting but nothing which really stood out.

The room I spoke in was, as I said before, a bit small but what really bothered me was that it had a very very cramped stage area so I had to hide behind the podium pretty much all my talk. My presentation style tends to be active so getting bogged down always makes me feel cramped. Which is why I really love Bolzano which has a really big stage. interestingly enough I never wonder to far as I need to see my monitor so I can cheat and see whats up next. So it is more mental then a real annoyance I think.

Slides from my talk

While there was no recording I have published the slides on SlideShare here: http://www.slideshare.net/MichaelMedin/2014-continuous-delivery-i2i

The Cake is not a lie!
Dagis Våra Barn: Kollektiv eller toppstyrt?