This years birthday cake was a Hello Kitty inspired cake (not licensed by Sanrio). It turned our rather nice and I though it was time to summarize the cakes we have done thus far through out the years. The whole cake obsession started for Evelinas first birthday where we did a three story strawberry cake. 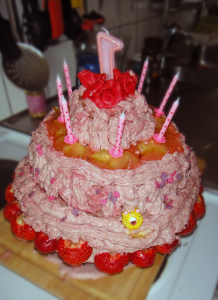 I have always enjoyed doing something a bit special and since I am an engineer at heart I decided to start with something which was pure engineering. Hence it became the three story strawberry cake. Making them is pretty simple in essence you create three round cakes of varying size and stack them on-top of each other and place a bunch of wiped cream mixed with strawberries.
We did go a bit overboard with the candles but in all honesty I think pretty much everything about this cake was about excess. But it was the first ever cake we did so we wanted to make it special!

This year we spent at my mothers house so time and resources was limited. So we ended up doing a pretty standard cake but still trying to achieve the two story effect albeit a bit sloppy. The cake was lovely as we used fresh strawberries though. And eating outside in the sun always tastes better. 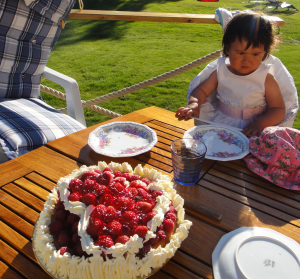 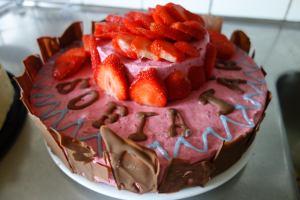 Now we were back home and it was time to step up the came a bit. I insisted on a multiple story cake as always (it was becoming a bit of an obsession). But to spice things up we went for cheesecake instead of the regular whipped cream cakes. The challenge with cheesecake is that there is no solid base to build on. Thus we opted for two stories and not three. The lack of flair we made up for by attempting some fancy home made chocolate walls and letters and what not. 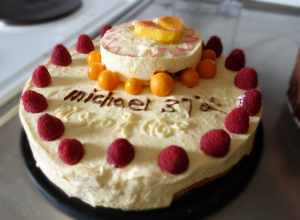 I personally think this is one the most splendid cakes we have done as it almost looks professional to my amateur eyes but then: What do I know about cakes?

The Sofia edition was raspberries and very tasty where as the other was Mango which was, lets just say, not very tasty.

This is probably the biggest gamble ever and without some help from my sister I think we would never have pulled it off. The design was for me "unique" but Google proved that was not the case and I have since seen a lot of stores selling them as well. But I actually thought it up myself despite other doing the same. This was a "princess cake" in the words full form as we did a Swedish princess cake in the form of a princess. 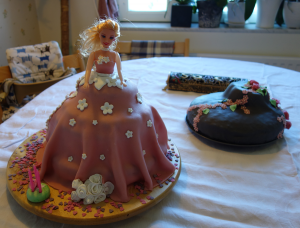 The process here is drastically different and dictated a new shift as this was the last" time we did a multistory cake. The second cake was designed by my sister (who has more experience) and I thinks hers was better looking but not as spectacular (the doll stands out in a crowd). 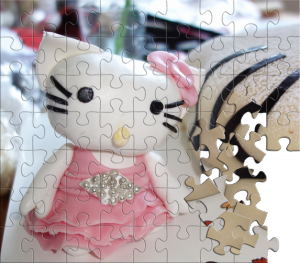 The last cake was the one we did this year for Sofia. And I don't mean last as in the last we will ever make but more like the last thus far. The theme was Hello Kitty and we ended up doing both a hello kitty cake and a hello Kitty Cake topper (which we actually did not top the cake with).

The cake was raspberry with marzipan cover and the topper was made out of sugarpaste and rice-crispy bars. Since my sisters children (which are lactose intolerant) we again ended up doing multiple cakes but opted for the same cake twice. Interestingly enough the cakes ended up having very little in decorations on them which was not the plan. But I think it looked quite nice as they were and never felt the need to add more "stuff" which is also why ultimately we ended up putting the topper on the side. So perhaps less really is more.

The death of kitty

An interesting fact is that the head of kitty was a bit on the heavy side so at the end of the day the weight had dislodge and I found her on the stove leaning back heavily with a chopped of head... An apparent spontaneous suicide me thinks... 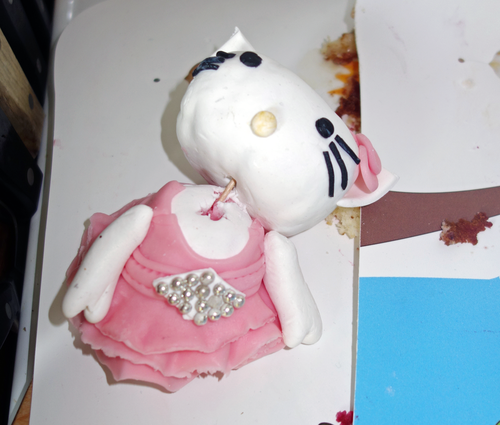 The cake is a lie

If you happen to be wondering about the title. Give google a spin: https://www.google.se/search?q=the+cake+is+a+lie

I have been quite for a few weeks, and that is not just because I have been lazy. No in fact I have been extremely busy and will probably be for the foreseeable future. But I shall try to squeeze out some time to write the odd blog post in the new few weeks at least. So why have I been busy you ask?