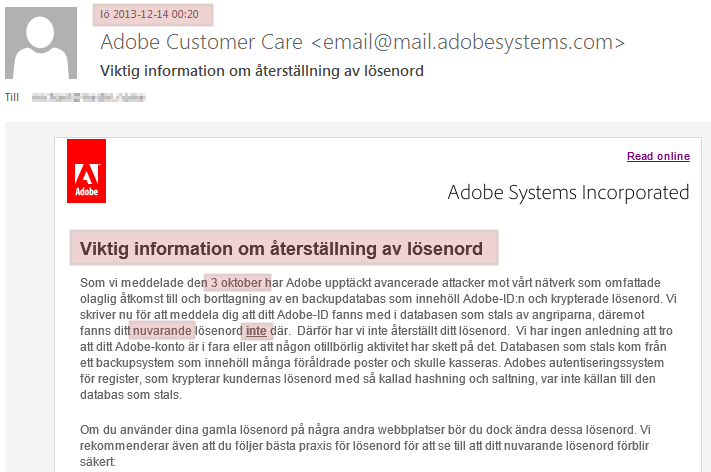 Adobe was “hacked” a few months ago, this is not really news. Everyone has been talking about this for a while now. But what has irked me is that I have not received any information from Adobe.

Now this does not mean my “current password” was compromised (I changed it after the news broke) it means my "old" password has been compromised. Yet they put emphasis on the not to make people feel safe (despite them not being safe). Many people would have used that password elsewhere which means they are now compromised.

What is really sad

Now the really sad thing about this is that Adobe has waited over two months to disclose this information to me.

Now I was lucky! I am a computer-guy. I know this! I follow tech news, I don’t re-use password, and all that.

But Adobe does not only target “computer-guys” they sell books (or manage licenses), at least that’s what I use them for, and designer software and such.

What about my mother? I have been talking here into getting an e-reader for years.

No, this is really really sad

How can someone wait over 2 months before telling everyone they accidentally lost the spare key they had been borrowing?