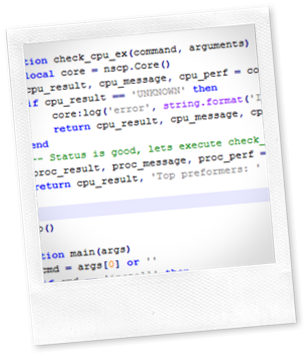 More than the sum of its parts

The first thing we need to explore is the feature of NSClient++ we need to do this. All these is based of NSClient++ 0.4.2 since a lot of the building block are not available in previous versions.

So now we have the parts lets explore them a bit. I wont go into details here about what these commands can do instead I will detail which command lines we are interested in.

We wont set any arguments for this command. instead we will pass through any arguments given to our command to that command. This means that our command works transparently and any new features added to check_cpu in the future will be supported. But it can be good to explain some arguments which can be sent to our script (and thus also to check_cpu).

The most common argument is time which allows us to change the default times to check (default is 5m, 1m and 5s).

Next up is check_process which we need to send a whole range of arguments to to make it do what we want. The final command looks like this:

Notice in the previous command how the performance data is not sorted (instead it is provided in order by the pid). We will use filter_perf for this so notice below how the data is sorted.

LuaScript is not a command but a module. Writing Lua script has been covered before Statefull scripts on this blog and while the language may seem a bit odd at first it is pretty simple to use and abuse for changing things around a bit. The most important aspect is that it is included and requires nothing on the run-time side and since it is running inside NSClient++ is it lightning fast and can do a lot more then regular “external scripts”.

Some examples of this is interact with other commands, read and modify the NSClient++ configuration etc etc.

The configuration for loading a lua script is pretty light as well:

Putting the pieces together

So now we have the components we need and next week I shall put the pieces together and create the script. For the impatient the script can already be found in the latest build of NSClient++.

check_cpu with top consumers in NSClient++ (part 2 of 2)

A tutorial for writing a quick and simple Lua script which will turn check_cpu into a multi functional check which return top CPU consumers. In last weeks edition I introduced the various parts we need to make this a reality. And that idea I have with NSClient++ is to create a Lego box with small multi purpose functions which the users can combine in many different ways. Here I will show you how we can do that.

Scripting on the Windows side

The biggest reason for Nagios success is the ability to extend it with custom scripts which makes it one of the most powerful monitoring systems. Now Nagios is not the only place where you can extend your monitoring! NSClient++ provides many ways to extend it with scripts and since I have gotten many questions about how to use scripts with NSClient++ lately I have decided to write this tutorial to help sort out the concepts.

I will be presenting at Nagios World Conference North America 2013!

Just thought I'd drop a short note mentioning my presentation for NWCNA 2013 has been accepted and I will be presenting there.

The talk is (surprise surprise) about the new features of NSClient++ with a heavy focus on the up-coming 0.4.2 version which will take real-time monitoring to a whole new level.