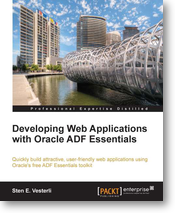 First off beware this is technically a sponsored review as I did not pay for the book. But fear not I will remain objective despite this fact.

All in all I liked the book but it is not without its flaws. The chief flaw is actually not the author's fault but the fact that the Open Source version of ADF seems very immature and after having read the book I am left wondering why anyone would even bother with it?

To Adf or Not to Adf?

I think the previous section requires some explanation. ADF for me is a nice framework for rapid prototyping of administrative user interfaces. What I mean by this is that you can (starting from a database model) prototype a fully working application in minutes. This is a really amazing feat and Oracle has really succeeded in this regard.

Now to the problem. The book is around 200 pages long. The first 100 pages covers creating the first working application. Then another 50 with some additional workarounds for the various technologies used.

Now this is not quite as bad as it sounds because Sten does a superb job of explaining why it does not work and how to fix it. So all in all you learn quite a lot about ADF from this experience.

Instead it makes me wonder why Adf Essential even exists. As I said the normal Adf tutorial is maybe some 10-15 minutes of clicking. But while reading his book I often get the urge to pickup my Ruby on Rails book and see if it would not be faster learn to learn Ruby first than struggling with this?

I mean when he wrote: *“…Version 4.0 of GlassFish has been released but you cannot run ADF Essential on it…”* I cant but help to wonder why he did not drop the “Essential” part from the title and instead produce a nice Adf book.

So if we excuse the fact that Adf Essentials seem to be an early beta at the moment and focus on the book. It is as I said pretty good. Some analogies really made me go: What? But that could be me lacking his background and apart from this the Language is very good and you really can tell that Sten knows his way around Adf and is good at explaining.

The book is written so an absolute beginner to Java would understand most of it (which is also the way Oracle often pitches Adf). And he even managed to explain the View vs Entity which I have always found a bit odd before.

A few things I really disliked with the book are that he gives a default password to use. And while he does mention default passwords should not be used I find it bad to encourage it by printing a sample password. A better way would have been to teach the reader how to reset the password instead.

Another thing is that he prints CSS rules directly in his code which is another no-no in my book and should not be encouraged. And while I understand that you have to do things like this to make things simple for the reader I personally think it is better to skip sections requiring it since I know most newbies will copy the code as-is not understanding that it is bad practice.

On the other had there are also many thing I really enjoyed such as explaining that applications should be split up (and how to do it) as well as introduce version control systems, logging frameworks, code templates as well as build scripts and many other similar things. And these are important things which many books leave out.

What's in the book

The book is around 200 pages (I read the ePub version) and spans eight chapters. It is designed as a tutorial which means you probably want to read it from cover to cover. I guess some chapters towards the end could be considered self contained.

This is a good book for Java beginners wanting to learn Adf Essentials (and probably Adf as well) the main problem I have with the book is the Essentials part. Adf Essentials does not strike me as a production read technology instead I get the feeling it is something Oracle released as an after thought to be able to say “Open Source” on a power point presentation somewhere.

That said the book does a good job explaining Adf (and how to maneuver the various issues and pitfalls of using Adf with non Oracle technologies).

And most importantly of all it is written by someone who actually knows what he is talking about and has something to say!

So all in all I can recommend the book to beginners to Java who want to learn about Adf.

Video: Simplified Monitoring? from OSMC 2013
check_cpu with top consumers in NSClient++ (part 1 of 2)

Spent three days this week at JFokus so I thought I’d share my views a bit. To be honest the conference was a bit on the lighter side and I think in hindsight I did a really botched job selecting sessions. I managed to pick both some very amazing sessions as well as a lot of introductions, sales pitches or things I already knew.