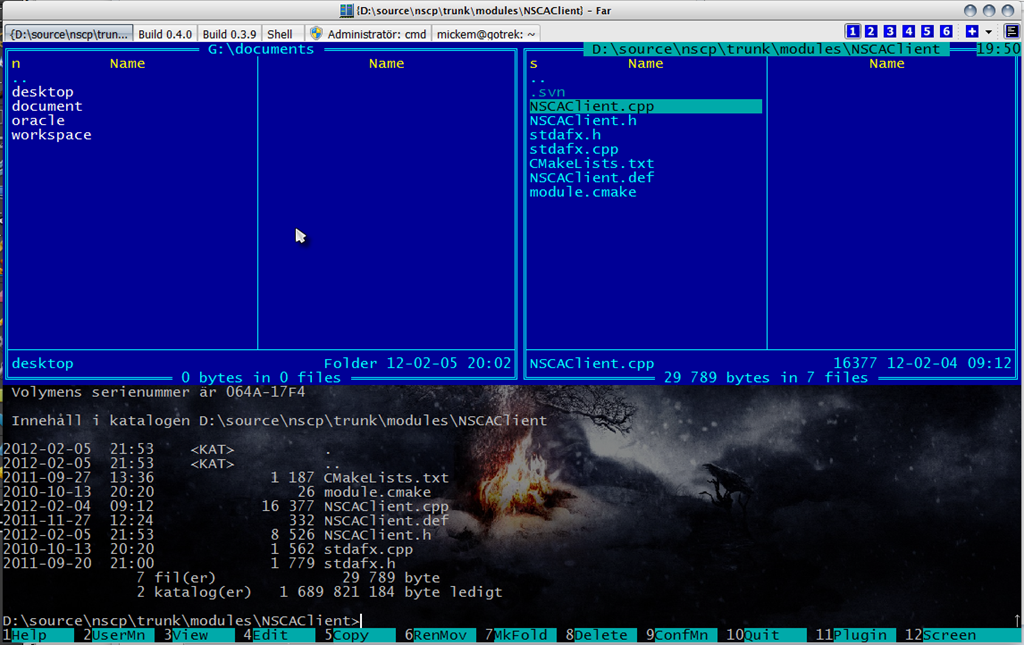 NSClient++ despite its name is most often used in server mode responding to remote calls via either NRPE or check_nt. The closest thing to a client we get in normal mode of operation is NSCA where we submit data back. But NSClient++ can act as a client as well which is not just something I use for unit testing but something which can actually be useful in your monitoring environment.

A good example of a really useful feature is creating a proxy or use NSClient++ as proxies to add intelligence (see my post earlier on writing stateful scripts Enhance your monitoring with stateful scripts).

We will quickly go though the command line interface for using it is a check client following that we will look at using the clients from within NSClient++ both from checks and scripts and finally we will setup a simple NRPE proxy for checking machines on a remote inaccessible network. As a bonus exercise I will show how to create a NRPE-to-NSCA proxy to create a passive-active bridge to help you transition from an active setup to a passive one if you are so inclined.

Before we start using the which has been touched briefly many times before in various blog posts so I will try to explain some of the underlying concepts you will encounter.

The first concept to understand is that the command line interface has “contexts” in our case we want to use the "client context". But many protocols has short hands to reduce the typing thus the following two commands are equivalent:

I tend use the latter format for brevity but it is important to understand that is is merely an alias.

To make this transparent for the user the loader will pass along any unknown options and use (eat) all the ones it knows about. This is all well and good as long as the options are distinctly different. For instance *--host* will never be used by the loader. But as soon as we have options which are used by both parties such as *--help*it will becomes a bit awkward because unexpectedly the loader might pickup options we intended for the module. To work around this you can use the double dash (--) to denote that all options after this will be intended for the module (and ignored b the loader).

The best illustration for this is to compare the result of these two commands:

NSClient++ support several "modes" which are modeled on top of Nagios the various monitoring paradigms.

We have (currently) three main modes (with a fourth planned):

Now that we have sorted out the important bits we end up with the following to run as a nrpe client:

And we just stack all options at the end much like we would with check_nrpe.

If we instead want to submit via NSCA we simply replace nrpe with nsca and stack on various options related to submissions instead. So what are the options?

Well, best way is to use the --help command like so:

As you can see there is a lot of options but a lot of it is for various things you probably wont need initially so if we remove ssl/certificate related options (Which you can find more about in the Securing NRPE With certificate based authentication) as well as all modes apart from query we end up with the following list:

And this is very similar to the check_nrpe options which in turns means it is very similar to how you use check_nrpe. So one might argue that the benefit to NSClient++ as a client is limited. And indeed it is but in contrast to NRPE which is essentially a dead project NSClient++ is evolving. For instance in 0.4.1 we introduced full SSL support and in 0.4.2 we are planning to add protocol tweaks to support passwords as well as variable length payloads.

As you saw there is a lot of options and going into them in detail is beyond the scope of this article so I will leave it with the following two examples:

One thing I want to touch briefly before continuing is targets. A target is much like a host definition inside NSClient++ so instead of adding all the hosts ports and security details you can simply specify the target and configure the other options in the configuration file.

So hopefully now you have a solid understanding of how the clients work lets move on and explore how you can use them from within NSClient++ as check commands.

Lets first load the NRPEClient and see which commands we have:

As discussed earlier for NRPE most of these commands are not useful since NRPE is a single paradigm protocol. So lets focus on nrpe_query.

Now this screen looks surprisingly like the command line help screen and that is because this is in many ways exactly the same command.

So accessing a remote NRPE server we would use the following commands:

They are all the same but the last version is better suited to run from check_nrpe and other remote queries since they do not allow the -- syntax for options. So using clients from within NSClient++ is almost the exact same as using them from command line. But before we move on to the script lets revisit targets a bit. Previously the target was defined like this:

This is marginally useful since all we can configure is host and port. What if we want to disable SSL as well? Then we use the longer object format instead which looks like this (notice the section name now includes the alias which means all the options in this section relates to the alias).

Scripts are very similar to the previous use cases (which has been the idea all along) the main difference is that we can now use both modes of execution.

So we have already been through this but I will give a quick example here using Python.

So now you might be wondering what the difference between execution and query is?

And as I mentioned initially the main difference between them is the way the data is sent. In a query for instance performance data is parsed, when you execute something the result is only raw text. The idea behind the execution mode is to execute commands not retrieve data. So in this case when we execute something we do not get performance data as a separate field.

So lets put all this together and execute some remote-remote checks but first lets set the scene so it will be simpler to keep track of things. We have our Monitoring Server server running check_nrpe against our Proxy server (running NSClient++) which in turn will use the NRPEClient to run the check against the Monitored Host.

First we need to configure the proxy

Next we configure our remote NRPE on our Monitored Host to accept requests from our Proxy.

Finally we execute our check from the monitoring server (here we use the syntax without -- since check_nrpe wont allow us to have -- or - in the arguments).

I thought I would return to a subject I have brought up several times on various presentations since I think it is neat if not all that useful feature. But it is a good way to explain things you can do.

This is similar to the above NRPE Proxy solution but instead of scheduling checks from the Monitoring server we schedule them from the Proxy and submit them back passively via NSCA.

The setup on the Monitored Host is the same so all we need to do is change the Proxy configuration as below:

The main difference is that we need to change NRPEServer for NSCAClient and of course configure our NSCA connection details including encryption and password. We also need to configure all our checks under the schedules section. In my case here I simply have a single one called remote_host_check_ok which runs check_ok on our remote host.

So that’s pretty much all you can do with clients. Hopefully you will find some cool and interesting things you can use in your monitoring infrastructure.

A lot of people coming to NSClient++ has a background in NRPE since it is a common transport mechanism for check results on Linux.

And while NSClient++ is fully NRPE compatible it allows for more control and has more features which can make it seem difficult to get started with. This is a guide for getting started with NSClient++ from a NRPE perspective.

Time for yet another tutorial this time detailing how to monitoring log files both event log and regular text files. The event log parts will build a bit on the earlier posts on monitoring the event log but since the “event log cache” feature has been replaced by the generic SimpleCache in 0.4.1 as well as 0.4.1 introducing a new SimpleFileWriter module as well  I felt it was time to re-visit this topic.