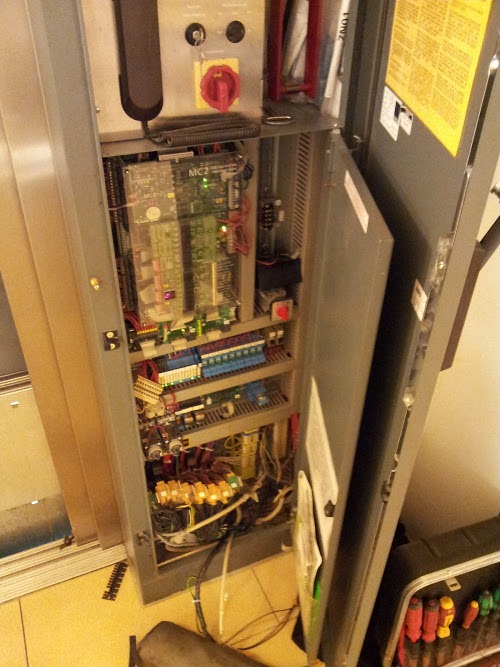 One massive problem with the venue for this conference is that there are no stairs (ish) so you have to use on of the two elevators when you want to visit your room. This means when you head down for breakfast it usually takes 5-10 minutes as you have to wait for the overfull elevator. To top that this year they had managed to break one of the elevator. On the upside I managed to get some nice pictures of the surprisingly large number of components which makes up an elevator panel.

Conference started off with a presentation on Nagios 4 by Andreas Ericsson.
The presentation started off impressively with some Algorithm theory but unfortunately I never really felt he connected the rest of the slides with this theory (apart from dropping the odd O(x) here and there so I felt a bit cheated. Apart from this he did a nice job introducing the new performance enhancements in Nagios 4 which seems like pretty cool stuff.

Next up was a session about Pacemaker which I guess is not strictly monitoring (in my sense) but a way to prevent you from even having a problem in the first place. Pacemaker seems like cool stuff but since I am not really playing much with clusters I can’t really compare.

Wow, this was really cool. The message (in comparison to Nagios?) was
It is open source (not open core) as well as the always reoccurring phrase "and it is all included" (in comparison to the Nagios way which tends to be it is all in an add-on). I really liked the presentation and much of the stuff which Zabbix has “out of the box” is really impressive. *Definitely on my check-it-out list.* 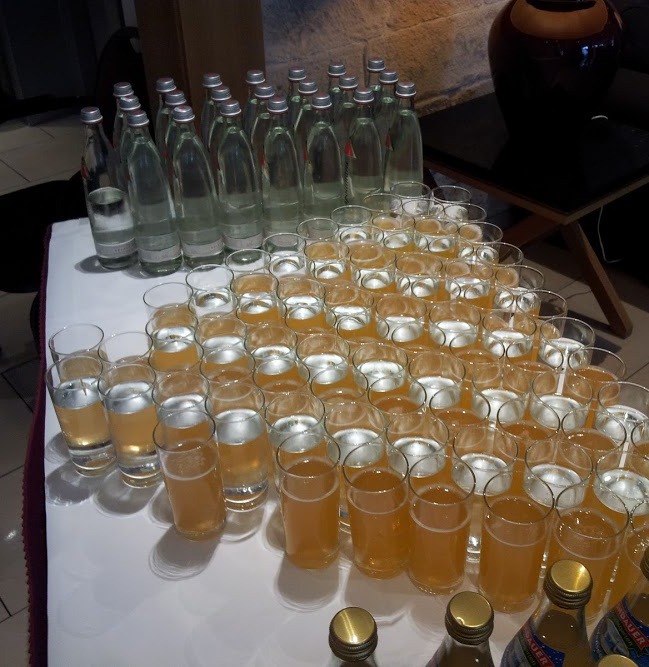 Lunch was the usual choice of food as well as the rather nice side dishes(?) in various forms. I was rather impressed with the glass configuration where someone had taken the time to arranged juice and water glasses in a triangle with juice and water every other row.

After attending a few minutes of this where he explained how the MIB worked I feel naah, to basic for me and left seeking to chat a bit to the Icinga people about “the other project”.

Next up was a presentation about the monitoring they do at CERN which was very cool.
It is always interesting to hear when people who have insanely large environments speak especially if they have spent a lot of time working in the monitoring space.
Seems CERN previously had a “use what you like” philosophy but are now trying to gear towards a streamlined approach where they can interchange monitoring data between departments.

Sounds reasonable I guess and I have been, with NSClient++, wanted for some time to create a standard solution.

He also talked a lot of about CEP (Complex Event Processing) and self-learning monitoring which (on the theoretical side) is really really cool (and something I have been advocating as well).
*Kudos for mentioning they use NSClient++ (made my day).*

Not really my cup of tea really. Was a Nagios add-on for harvesting information via SNMP and the like? Seemed to me a lot like NIDI apart from tighter integration with Nagios. 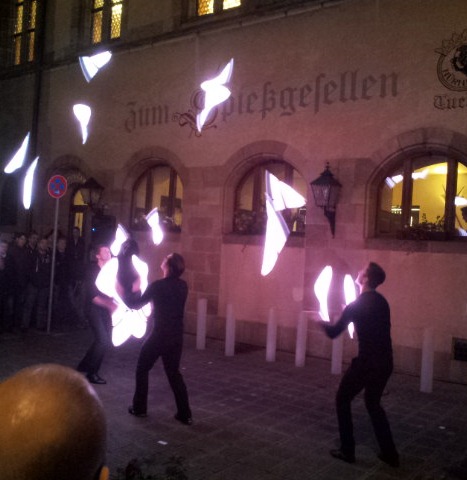 Next up was the evening event where I met up with the "old crew" from Tom-Tom as well with "The Zabbix" guy (I am bad with names, ok?). And we had a blast as always. This year they had added some entertainment in the form of light jugglers as well as what might have been some German stand-up-comedy. No idea what they were on about since I don't understand German at all.

From what I heard “the Zabbix” guy and Andreas Ericsson had a great time ;)

Shinken is as always innovating and coming up with new stuff. But seems they really are encumbered a bit by their Nagios roots as a lot of what they do is to "create Nagios configuration" automagically.
This might seem good on paper but magic tends to break once you start using it to much as well as it makes things very difficult to understand.
So not sure if I agree with this really but I guess it saves time as long as you know what you are doing.
But regardless of the methods they have some really cool stuff and I really think Zabbix and Shinken are innovating and moving quite far beyond Nagios.

Since this is my blog I won’t really go into my presentation apart from saying I (as last year) had issues with the presenter and I think it is time to abandon Logitech for a new brand to see if someone else’s stuff is not utterly broken, seems that the Logitech can’t work when you have a wireless microphone in the vicinity of the presenter.

This one I was really looking forward to as I would like to know how to setup a MySQL monitoring myself. Unfortunately the information was more along the lines of "here is a bunch of plugins" and not so much about best practices for monitoring so did not really help me too much. But he did reference a book which sounded interesting so at least I got some information about of it.

This I think a lot of people will like but for me being dev this was pretty much old news.
Disregarding that; the presentation was top notch and the subject really cool. Bringing BDD to the monitoring world might actually be a good idea?

I guess I might have liked a bit more hands on and experiences and less theory but perhaps that is due to my dev background. 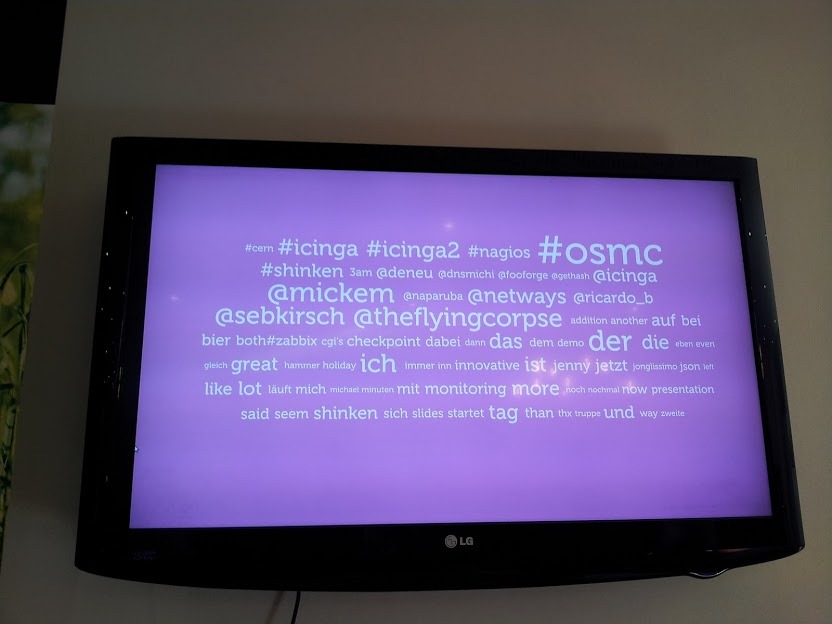 For some odd reason each year there is one dual-German session slot which means I tend to leave early so this was the end of the actual conference for me.  Instead I brought my bangs over to my new hotel where I was to stay the last night and managed to walk around Nuremberg a bit. Finally I managed to get a shot of me (@mickem) winning the twitter war much thanks to Rune Darrud who assisted me by repeatedly tweating my name

Finally we had the netways/Icinga after party which was nice this year as well. Albeit fortunately no one (I’m looking at you Pamela) kept feeding various strange drinks this year which meant I did in fact not have a massive hangover the next day. 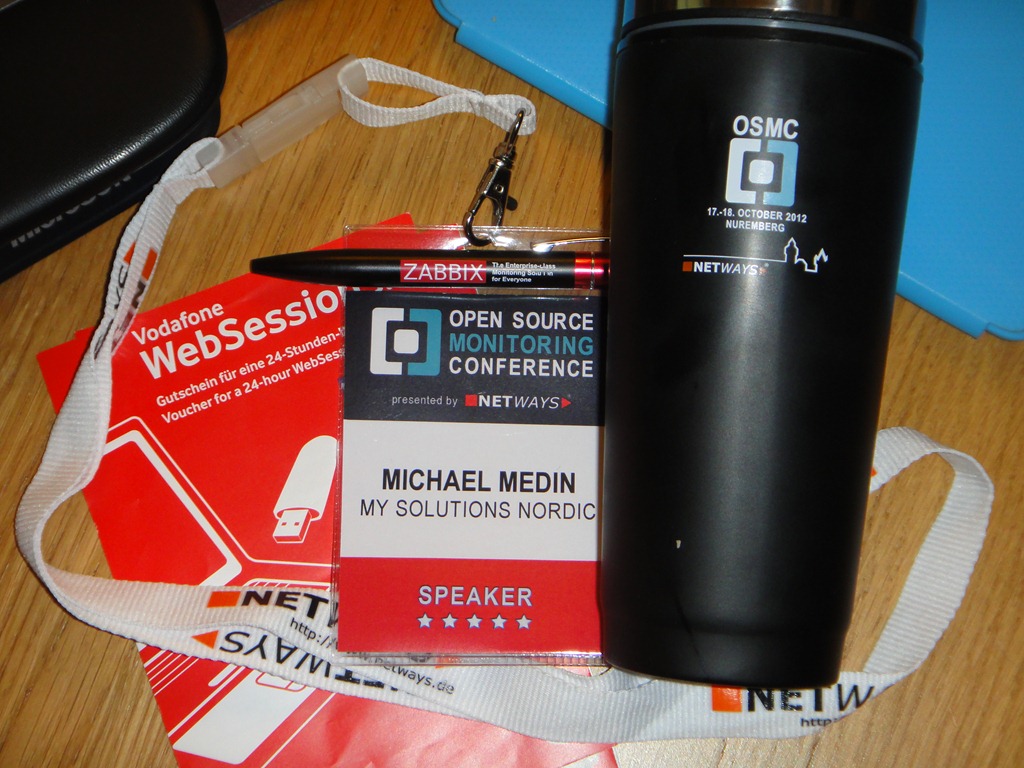 Thanks to my review (Review: Open Source Monitoring Conference 2011) last year they managed to listen and offered some nice loot to all attendees at the conference. This year the loot extended to a very nice Zabbix pen as well as a mug (blatantly copied from last years Nagios event) but at least this was more of a thermos cup with a water tight seal which means I can actually use it to carry milk and such for the baby

A big thank you to Netways for arranging a nice conference again. And see you all next year!