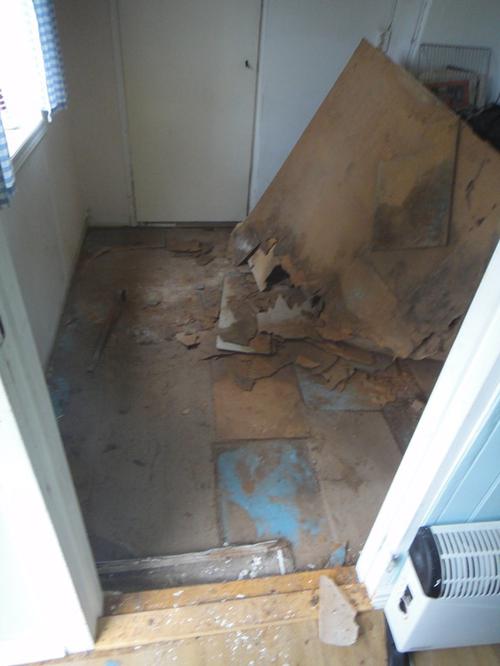 Sometimes I am actually not working with my computer. Usually this happens during summer when I am having what other people call vacation. This year I spent parts of the summer helping my mother fix up her house.

Mothers house is actually my Grandmothers old summer-house which she inherited when my grand mother passed away two years ago. At the time the place was a bit run down as no one had taken care of it for the last few years so there is plenty of work to be done. This time my main focus was the smaller of the two buildings (where I and my family usually live when we visit).

I started fixing it last year when I helped exchange the roof and installed two new windows as well as turn the hallway into a makeshift kitchen.

This year the idea was to fix the floor as well as insulate the last un-insulated wall. The project started off with a bit of a bummer when I removed the carpets and various other things they had placed on the floor only to discover that the floor was in fact not (like the rest of the building) made of wood but concrete. So the original plan which was to remove the old floor, dig out and adding new boards as well as top it off with wooden laminate flooring did not pan out to well.

So after a quick discussion with mother we revised our strategy to add leveling compound and on top of that a sheet of thick particle board to make it level with the rest of the rooms and finally add the usual wooden laminate flooring. 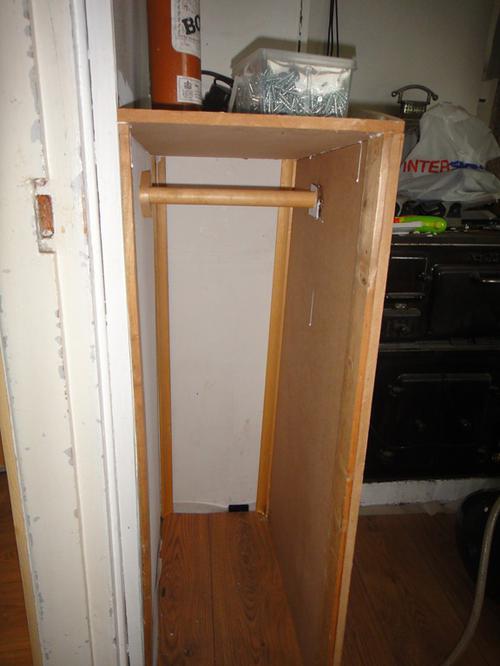 Being in the spirit of building stuff I also tried to build some strange sort of cabinet thingy to hang some clothes in not really sure I liked the outcome of it though. The reason it looks like it is leaning all over the place is that the walls are not straight (the house is more than a hundred years old) so the cabinet (being straight) looks a bit misplaced. But I figured it was a better option to having things fall off had I chosen to go with having the walls as base. 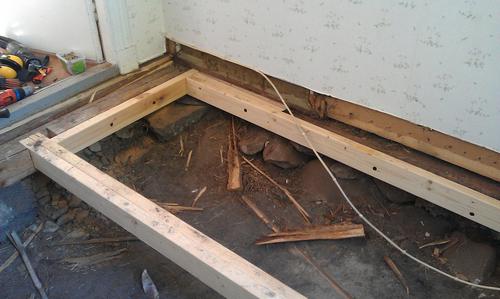 Now since I had all them planks we got for the kitchen lying around I figured why not use them in one of the sleeping rooms instead?

So the project expanded to cover on of the sleeping rooms as well. This was a bit more challenging (and fun) as two of the beams had rooted away (well, one rotted and one attacked by termites). Since the rotted beam was carrying the wall I only reinforced it and tried to lift it back by applying pressure. The other beam I replaced altogether using two brand new beams. Notice the new square beams in contrast to the original real-wood beams used 100 years ago. 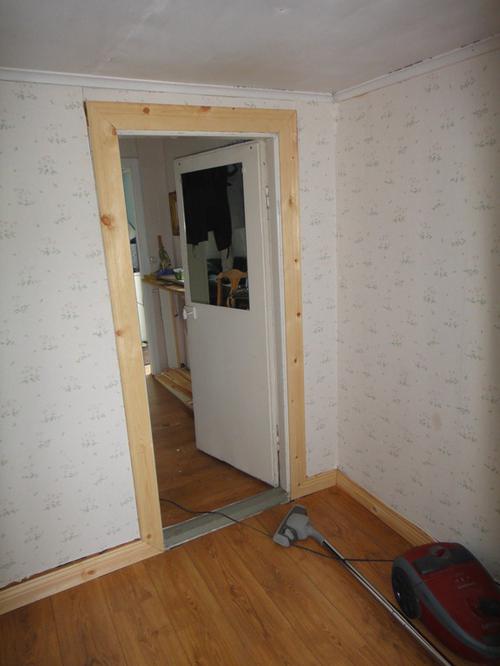 As always we added in a wooden laminate floor as well as new moldings. The result was rather spectacular as the floor was almost completely level now. Comparing to before when the broken beam caused the floor to have an almost 10cm drop in the center. This is especially nice since we have a slide-in bed which was rather difficult to slide on the old floor.

Next up was the “last old wall” to which I added some windows last year. I started last year trying to attach some beams to the old wall in an attempt to just add a new layer of insulation on top of the old wall. This proved more difficult than I had anticipated (mainly due to the earlier wall-builders using very thin beams making it all but impossible to find and attach anything to them). This year we had decided to replace the old wall all together. So I tor down all the old layers down to the original plank wall and built a two new layers of beams adding 20cm of insulation as well as new boards. The entire things was remarkably simple and quick much quicker then trying to path the old wall. 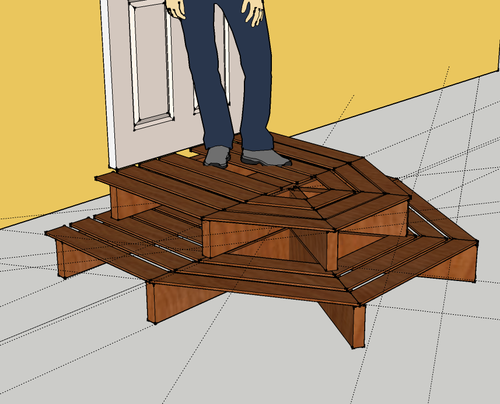 The last (ish) major project was building new stairs for the tiny building. The earlier stairs which was actually built by me as well was well over 10 years old built out of non pressure-treated wood so they had all but rotted away making it rather hazardous to enter the building.

This project I approached with meticulous planning by first building a 3d-model using Google Sketchup. Unfortunately due to some rather silly simplifications to the 3d-model the entire thing turned out a bit more difficult than anticipated. In my model I had not cared about the actual width of the boards instead I just built the wire frame by connecting the various corners. This means that the various boards in the mode was non the same width. So once I had built the front part I noticed that the last few pieces did not fit at all. 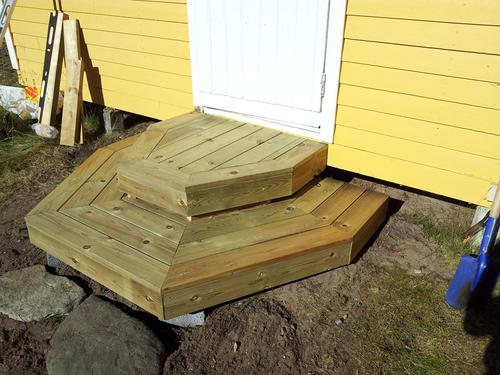 Fortunately my mother persisted saying it was possible so after some paper modeling using a protractor and some rulers I found some modifications which turned out as a rather nice compromise. There were a few other mistakes as well such as the height was 2cm to high and what not but I guess that was mainly a miss match between the idea and the reality and not so much a problem with the result. Regardless of any issues the end result turned out rather nice. So it is now safe again to enter the building (for another 10 years or so).

Might sounds like a strange title since Vietnam is by no means a part of China but we decided to take a vacation from our vacation and head over to Ha Long Bay in Vietnam. The first part of this trip has already been chronicled in the first trip report: Trip to China: Dong Xing, Part 1 <http://www.medin.name/blog/2013/03/14/trip-to-china-dong-xing-part-1/> and later parts will be published in a bit.

This will be a rather lengthy post about my travels in China. I was planning to blog regularly whilst in China but the internet situation made that difficult (also I was on vacation and being lazy). This first edition is about the first week or so we spent in DongXing before heading down into Vietnam and onward to Shenzhen which will come in the later editions.