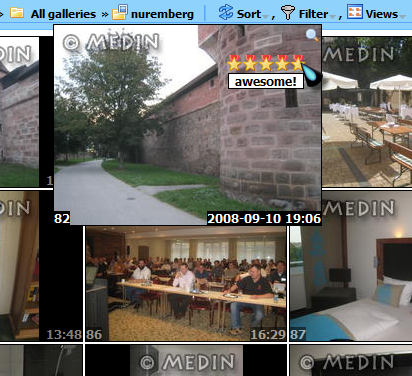 Around 10 years ago I wrote a custom gallery in php it was nice and all but since it is abandoneware it is starting to get less and less usable. So I decided on Gallery 3 to replace it and I thought Id share some observations on it here. So how does Gallery 3 stack up? Was it all the modern “web 2.0 social experience” I expected?

Gallery 3 is a complete rewrite of Gallery 2 (a popular photo gallery). It seems about a year old but since its release there have only had two minor updates so it seems not to actively developed.

Still it is one of the major players in the gallery market which I guess is quickly being eaten alive by sites provided by the big players such as Facebook, Google and Microsoft. Since I have, by far, to many photos to store it all in the cloud I tend to look for a custom hosting where I can tinker a bit with the end result.

Well first off lets start with the positive. Gallery 3 has a solid plugin foundation (not Wordpress galore with thousands of them but then again there is only one plugin per feature so you don’t need thousands of them) but still a sizable amount somewhere in-between 150 and 200. Many of the plugins do what they announce and just work without any issues. They solve most common problems easily without any custom fidgeting and it is thus a breeze to get started. The plugins I use are:

This is pretty much what I would expect. It is a bit low on the social side but that is not uncommon and there are some interesting plans in those areas.

Apart from the solid set of plugins things are working quite well and everything seems solid enough. So happy story all the way?

Not really, because once I had things running smoothly I was forced to scratch the surface as I wanted to make the style look like my Wordpress theme. And here is where it all starts to fall apart once you start scratching you end up with some rather mind bogglingly strange things. 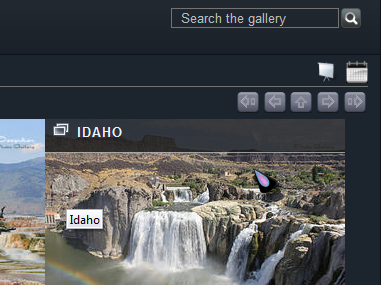 Perhaps they want themes to provide all this?

That is the direction which Greydragon went. Greydragon is a pretty solid all inclusive theme which seems to add a workaround for most of the oddities and adds many of the configuration options I would have expected out of the box. Unfortunately the theme in it self looks rather dated something easily solved with some minor customizations and CSS you’d think: right?

Layout and design aside, it is after all up to taste, there is a lot of things I would have expected in a modern gallery software which is missing in gallery 3. 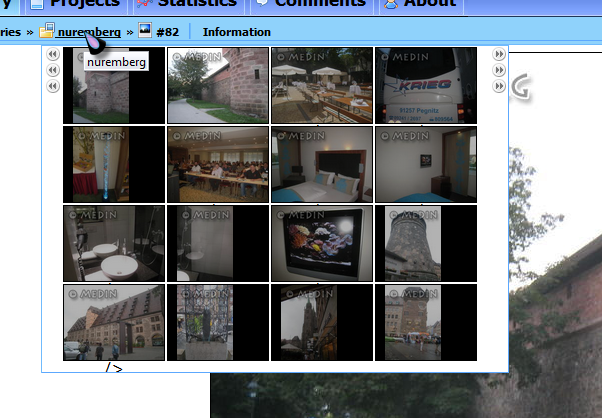 Another thing which really bothered me was the lack of concept such as views and trees. I would have liked to switch view to something less spacious like a list view or tiles view. And it would have been nice to be able to browse a tree somewhere as it is rather slow clicking around.

Another point I really missed was alias in my previous gallery an album could reside in multiple folders making it possible to group things in more then one way. I guess tags could replace this but browsing tags is an extension and not out of the box. Also tags are "more photos" then albums. 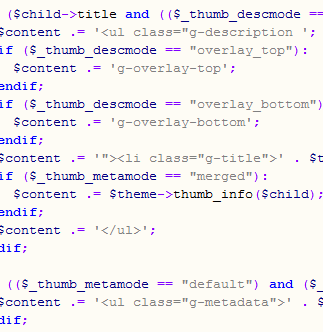 As a developer my approach to problem is to fix what I feel is broken. So the first thing I did was open up vi and start to dabble here and there trying to make things at least look fresh and modern (in my humble opinion).

And that’s when it start to become really ugly.

Graydragon has pretty much recreated most of the features which would be found in a gallery in the theme (probably as the API seems limited).

To make matters worse since there is no standard way to interact between the various models and views the only way to add support for new features is to recreate the functionality again and again and again.

A good example of this is the “tag_album” module which in theory could have piggy backed on the normal thumbnails views just replacing the data with photos based on tags right?

Wrong! instead they opted to recreate the page-template, album page-template, and thumbnails-template to facilitate the tag browsing. This as there seems to be no easy way to create an instance of an “album” and say: Hey, lets render this guy for me.

This means when I want it to integrate nicely in my theme I ended up having to add the same hard coded stuff in my hacked Greydragon to make it look nice.

Perhaps this is due to inexperienced plugin developers, perhaps a badly designed API? I havent looked at Gallery 3 enough to make up my mind. But regardless of the reason the end result is leaves a lot to be desired.

And before I get carried away lets end this by briefly mentioning the clobbered mix of php, html and what not found in parts of the code. Hello ASP and welcome back to the year 2000! 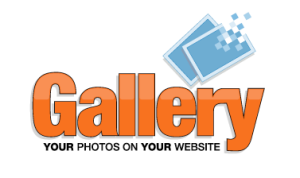 Now don’t get me wrong Gallery 3 is a really nice gallery it is one of the best (and I have tried a myriad of them) it really works handsomely. But it seems that Gallery 3 (and many others) are stuck somewhere between 10 years ago and now. Where is all the modern stuff? Ajax, javascript, hell even some flash would have been a welcome change.

If you are looking for gallery you cant really go wrong with gallery it has most features you will require albeit packaged in a pre-web 2.0 edition. But for most people this will not be a problem.

So just don’t expect a lot of cool stuff and make sure you like on of the included themes (as creating a custom one can be a huge endeavor).

Thumbnail 1000:s of photos on a Synology NAS (in hours not months)

I moved all my photos over to my Synology NAS (which I really enjoy) just to discover that it would take months to index all photos. So I started to look for options and while most people managed to increase the speed a bit by reducing the quality of the thumbnails I figured why not utilize some of the CPU power I have at home?

So I ended up using my Linux box to do the thumbnailing for me instead which reduced the time to thumbnail 30.000 photos down to hours.

This will be a rather lengthy post about my travels in China. I was planning to blog regularly whilst in China but the internet situation made that difficult (also I was on vacation and being lazy). This first edition is about the first week or so we spent in DongXing before heading down into Vietnam and onward to Shenzhen which will come in the later editions.

The Cake is not a lie!

This years birthday cake was a Hello Kitty inspired cake (not licensed by Sanrio). It turned our rather nice and I though it was time to summarize the cakes we have done thus far through out the years. The whole cake obsession started for Evelinas first birthday where we did a three story strawberry cake.