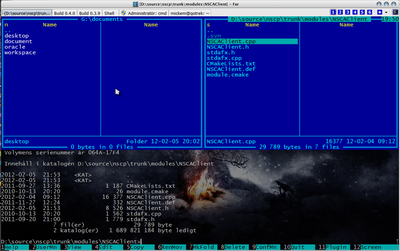 One of the new features of the up-coming NSClient++ 0.4.0 will be Python scripting support. The main reason for me to include Python script (apart from the coolness factor) is to write unit tests. Writing unit test for a monitoring agent with a C++ unit test kit is pretty difficult but more importantly not very productive. The main feature of an agent is to interact with the system and thus you need to know about the system to be able to test it (or mock the system which is tedious at best).

So how does the unit tests work and, perhaps more importantly, why should you care?

So how does the unit test framework in NSClient++ work? Well it is fairly straight forward as long as you understand some basic Python.

In this series (this is the first part) I will introduce how to write unit tests in Python and how to make sure your monitoring is actually working (before it breaks). As this is a work in progress the various topics are not nailed down but the over all idea is something like this:

So lets start what is the minimum effort required to get a unit test setup and installed in NSClient++?

Now this is not to bad right?

Going through the code briefly we have:

One of the nice features of using the framework for writing your unit tests is that you get install automagically (and eventually uninstall as well). This is done when we call the install wrapper on line 11 above. So how do we call the script on command line?

Well the rather complicated way to do this now is:

This will be prettified eventually but for now all these arguments are required so lets try to explain them quickly to see if it makes sense.

So it was not quite as complicated as it seemed right? Well it is far to complicated and it is on my TODO list so eventually you will most likely have something along the lines of nscp_client –script test_sample.py but for now we are stuck with the long version.

What this chunk does is add a few lines to the nsclient.ini file (or whatever settings store you are using).

So all that is left is actually running the test right?

Well, this is straight forward enough just start NSClient++ in test mode like so:

Once that is don we run the following command *py_unittest*.

Which yield the following:

So that’s pretty nice… all test failing (as we haven’t actually written one). But hopefully you get the idea. It is pretty damn simple to write unit tests in Python.

Thus ends this installment of this series and although it is not nailed down the general topic ideas for the next few installments are:

This is a series detailing how you can leverage WMI to monitor you Computers from a monitoring tool such as Nagios or Icinga. Since I decided to clean up the command line syntax of the WMI plugin for NSClient++ for the up-coming 0.4.0 version a few days ago I will start by showing how you can use what has become an almost full featured WMI client.

check_cpu with top consumers in NSClient++ (part 1 of 2)